In the anger, Kim Si Woo damaged his putter’s head, and then had to use the 3 wooden stick to close the hole in the second round major in Augusta National on April 9.

Floating needle at the edge of green hole 15. 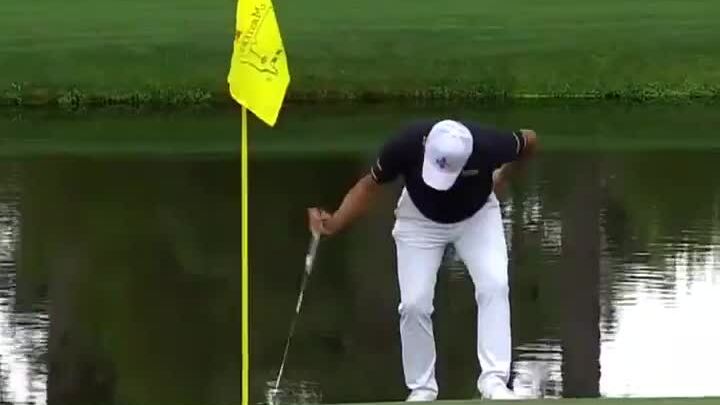 Previously, the Korean golfer scored four birdies and did not bogey throughout 13 holes. But anger sparked at the end of hole 14, when he brushed from the green but the ball crossed the goal by 1.5 meters. Kim putt again but it just rolled the hole, so he lost his third putt to finish at the bogey point.

In the 15th hole, the Korean player born in 1995 surpassed the green in the second shot. He chip in but the ball comes out close to the opposite edge, nearly 5.8 meters from the target.

The frustration peaked while waiting for the turn so Kim hit the putter hard on the green. The handle is bent, making it useless.

By law, Kim is not allowed to add putters until the end of the ring. And he has to choose the number 3 wooden stick. Kim thinks this tree is easy to control the speed of the ball on the green fast.

And with the wooden tip of the number 3, he almost birdie hole 15, then hold par with a light tap.

This is also the beginning of the par chain until the end. He hit twice on each green side in the 16-18 hole, with the longest paw distance reaching six meters.

With 69 second round strokes, Kim stood T6 at -4, three strokes away from Justin Rose at the top of the table. On the opening day, Kim stood on T8 (-1).

“I’m angry at myself – poor handling at holes 14 and 15. I didn’t intentionally damage the putter, but it’s broken,” said Kim. Golf Channel.

Finished the match, this reporter asked Kim about the backup putter. “I don’t want to answer anymore, sorry,” replied Kim. A few minutes later, Kim appeared in the green practicing with a new putter.