Kosgei holds the world record with 2 hours 14 minutes 4 seconds, set at the Chicago Marathon on October 13, 2019. Kenyan runner born in 1994 with teammate Jepchirchir – a two-time female half marathon champion (21.0975km) – is considered the number one candidate for the women’s marathon gold medal at Tokyo 2020.

But the severe weather in Sapporo this morning significantly affected the performance of both, even though they both have the best marathon record of the year (SB). Kosgei finished second with 2 hours 27 minutes 36 seconds. Jepchirchir finished first with 2 hours 27 minutes 20 seconds, but this is also 10 minutes behind the personal best (PB) – 2 hours 17 minutes 16 seconds – which this 1993-born runner set in Valencia last year.

Bronze medal belongs to American athlete Molly Seidel. The face is considered new in the group of female elite athletes in the third marathon in Sapporo this morning with 2 hours 27 minutes 46 seconds – not too far behind the two top stars in the world. This parameter is also considered a shock, because Seidel has just run the marathon for the third time (42.195km). She competed in this distance for the first time in the internal tournament of the US track and field team competing for tickets to Tokyo in February 2020 and achieved a result of 2 hours 27 minutes 31 seconds. In October 2020, Seidel ran for the second time in the London Marathon and finished the women’s sixth with 2 hours 25 minutes 13 seconds. 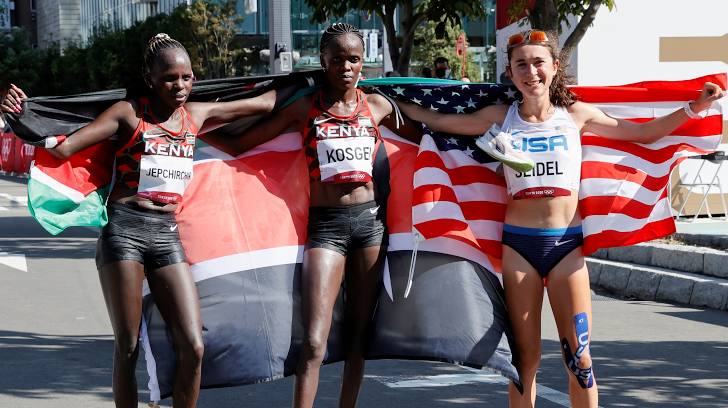 Severe weather forecast forced the organizers to push the women’s marathon time this morning to 6am, instead of 7am as the original schedule. But in conditions of very high temperature and humidity, the competition still turned into a torture display. 88 athletes competed, but 14 people, including world champion Ruth Chepngetich – could not complete the competition.

“Today’s race was really difficult, because it was extremely hot. I feel lucky that I can cope well with this weather condition. The other athletes too, we tried our best,” Jepchirchir replied when was asked about how the results in Sapporo this morning fell far short of her personal best.

In the early part of the competition, Chepngetich and Kosgei took the lead, in a group of 10 runners who soon broke out. But none of these 10 dared to accelerate for the first 30 kilometers, as they passed through the streets of Sapporo. The race only started fiercely from the 36 km mark, with Kosgei, Jepchirchir, Seidel and Israeli runner Lonah Chemtai Salpeter separating from the group, faster than the next group after about 10 seconds.

From the 38 km mark, when the temperature in Sapporo rose above 8 am, Seidel and Salpeter began to lose their strength. Israeli athletes sometimes have to walk. They helplessly watched Kenya’s two legs run away in the acceleration screen of the gold medal dispute. In the last 1km, Jepchirchir started to overtake and held the first place until the finish, while Kosgei only had enough energy to maintain the speed, accepting the second place with 16 seconds slower than his senior.

Kenya has won seven women’s marathon medals in 10 times this event has been included in the Olympic program since Los Angeles 1984. But this is the first time they have won first – second. Kenya thereby also defended the women’s marathon gold medal that they won thanks to Jemima Sumgong in Rio 2016.

“I’m glad that Kosgei and I brought Kenya the top two. When I speeded up in the late end and created the distance, I had to use the force of my mind, saying to myself, ‘Oh, I’m going to do it. okay, I’m going to win’,” said Jepchirchir after leaving the podium to receive his medal.