Nguyen Tien Minh lost 13-21, 13-21 to the world number three Anders Antonsen (Denmark), in the opening match of Group L badminton at the 2020 Olympics. 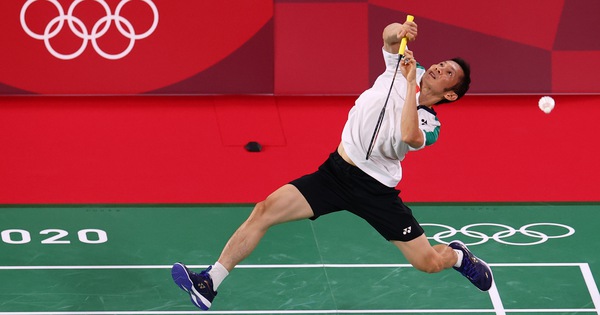 Against a strong opponent, Tien Minh entered the game well when he won five of the first 11 points. But the more Antonsen played, the more he proved to be superior to his elder in strength and fitness. The 1m83-tall player mastered the game with his all-round ball maneuvers as well as powerful jumps and smashes. At the age of 38, Tien Minh many times could not keep up with the play of the world’s number three opponent.

Antonsen regularly has streaks of five, six points in a row. The Danish player led 20-10, before Tien Minh rose up at the end of the set. The Vietnamese representative scored three points, but it was inevitable that the set would lose 13-21.

In the second set, Antonsen accelerated early and led 11-3. Tien Minh’s biggest impression in this match was the hit along the string at the beginning of the set. In the second half of the second set, Tien Minh played well and earned 10 more points, before hanging up the racket also with the score 13-21.

On July 27, Tien Minh will play the remaining match in the group stage against Azerbaijani-Indonesian tennis player Ade Resky Dwicahyo. The match against the world No. 80 opponent could be Tien Minh’s last match at the Tokyo Olympics. With only the top player in each group going to continue, the hope of the Vietnamese representative’s knockout round is not much after the loss to Antonsen.

Tien Minh, therefore, is difficult to break because he has never passed the first round in the Olympics. In 2008, he lost to Taiwan’s number one Hsieh Yu-hsing (Ta Du Hung) with a score of 1-2 in the round of 32, and soon left Beijing. Four years later in London, Tien Minh attended the tournament as the seed of the group. He won against Belgian player Yuhan Tan, but lost to Indian opponent Parupalli Kashyap two blank games and left the tournament. In the 2016 Rio group stage, Tien Minh won two matches, but lost to Lin Dan who was superior in terms of level.