Japan19-year-old runner Athing Mu helped the US win the first Olympic gold medal in the women’s 800m run in more than half a century.

In the final on the evening of August 3, Athing Mu took the lead from the start to the finish with 1 minute 55 seconds 21. She thereby broke the national record set by teammate Ajee Wilson at the Diamond League event in Monaco in 2017. with a time of 1 minute 55 seconds 61.

The victory made Athing the second American female athlete in history to win the Olympic gold medal in the women’s 800m run, after the legendary Madeline Manning in Mexico 1968. me after the US youth and college tournaments,” Athing said after finishing first.

Athing is the prodigy of American athletics. She set the US 600m indoor record in 2019 at the age of 16, with 1 minute 23 seconds 57, and set the world under-20 record in the 800m indoor distance in early 2021 with 1 minute 58 seconds 40. Legs Runner born in 2002 continues to make history, when he won a gold medal at the first Olympics, thereby bringing home the second gold medal for American track and field in Tokyo 2020, after the discus throw of female athlete Valarie Allman. 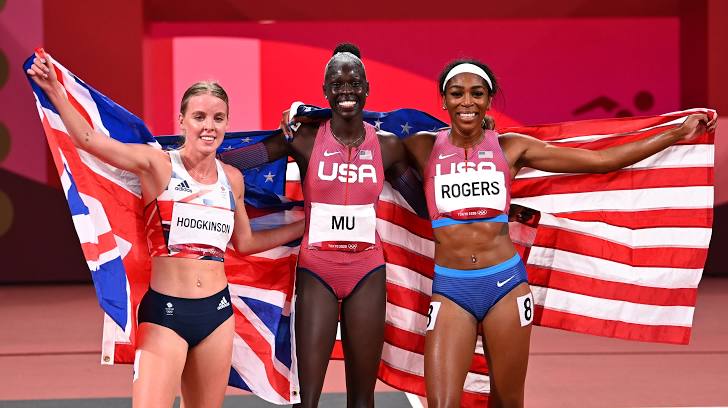 “It’s amazing. I feel like I’ve just accomplished one of my life’s goals,” added the 800m Olympic gold medalist. “I just wanted to win a medal, not a gold medal. But as the final approached, I said to myself, ‘I want to win a gold.’ This is the feat that I want to achieve. I am very happy. , lucky and excited to be here, and to have these experiences.”

The bronze medal belonged to 24-year-old American athlete Raevyn Rogers with 1 minute 56 seconds 81. She was only eighth after the first 400 meters, but sprinted in the last 50 meters to finish third.