AmericaThe referee used a thin sheet of paper to show that JT Poston hit an Out of Bound (OB) in the final round of the Barbasol Championship of the PGA Tour.

“I don’t think any part of the ball touched the string. Do you agree?”, the referee commented and confirmed with the litigant after professional manipulation on the Keene Trace field, Kentucky on July 18. He had just placed a piece of paper between the ball and the yellow line of the field limit to prove the ball was out, and Poston had to replay it with two penalty strokes.

At that time, Poston led the four closest opponents to four strokes after playing the par5 15 hole, which was 516 yards long. He pulled his hand too much on this shot, so the ball headed for the rough left of the fairway, where the white post was bound. Before settling, it bounced four times, the first time about 10 yards from the stake. With the possibility of losing the ball, Poston played a backup.

But when he reached the first ball, he discovered the original ball. Because it was located in the overgrown grass, under the yellow wire as the field line, he had to ask the referee but hoped the ball was still in play.

“The ball is too close. Looks OB but it’s unclear what part of the contact if the line is down to ball level” Poston initially commented on the situation.

The referee came to work with the paper, and Poston took off his hat and wiped his forehead. After he inserted it, the paper neither touched the ball nor the edge. Poston and the caddy have not recovered. “I mean the ball is really close. I want to make sure it’s OB,” added Poston. 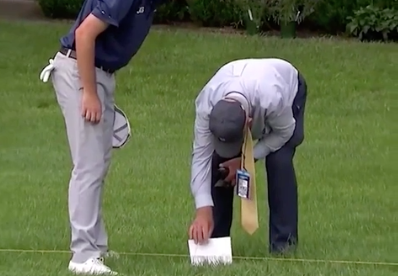 The referee uses a piece of paper to determine the OB

The referee repeats the validation operation and the result remains the same. “That’s why I use the paper,” explained the ink-bearer. In order for Poston to pay attention, he also waved a colleague to support. “You think the ball is out,” Poston asked the second referee. “Yes,” the man replied. “Okay,” Poston closed the story and hit a backup, then closed a double bogey on the 15th hole and lost his previous four-stroke advantage.

Barbasol Championship recorded the easiest 15 hole in four rounds. “That hole only needed to hit the fairway to get most birdies, so my ending was painful,” Poston said.

He bogey on 16th hole, kept par for the last two holes and had to play a playoff against Seamus Power because both had -21 points after 72 standard holes. The duel ended on the fifth extra hole, with Power holding par and Poston bogey. In the $3.5 million prize pool, Power received the championship $630,000, Poston received $381,500 for the runner-up.

The Barbasol Championship, which took place from July 15 to July 18, saw James Hahn narrowly achieve a rare 59 strokes in the penultimate round. At that time he scored two eagles, eight birdies on the 60-stroke scoreboard on par72. However, Hahn finished the last round of 70 strokes, so he finished T5.