Peruth Chemutai became the first Ugandan female athlete to win an Olympic gold medal when she finished first in the 3000m final of the Tokyo 2020 Olympic obstacle course on the evening of August 4. 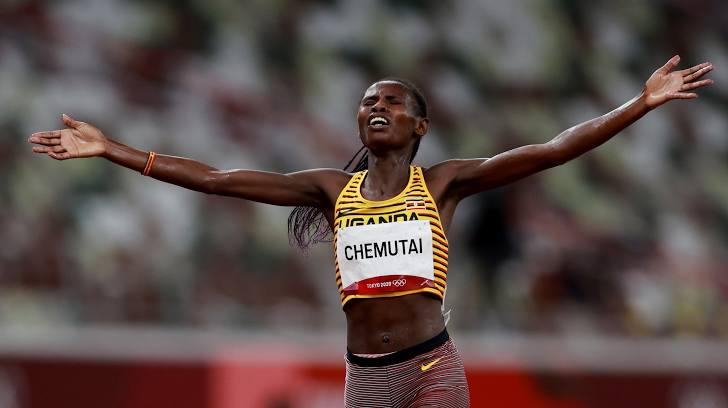 Chemutai finished first with a record of 9 minutes 1 second 45, more than three seconds ahead of the second, 28-year-old American runner Courtney Frerichs with 9 minutes 4 seconds 79. The bronze medal belonged to Kenyan Hyvin Kiyeng with 9 minutes. 5 seconds 39.

In the final on the evening of August 4, Chemutai used a strategy of hiding from the wind when starting slowly, only ranked eighth after the first 200m, and dropped to 12th at the 300 mark. She suddenly accelerated and took the lead from 400m mark. The 22-year-old runner dropped to third after half a race, and is still second behind Frerichs, at the 2,700m mark. But Chemutai sped up the last 300m to cross the finish line first.

This victory makes Chemutai the first Ugandan female athlete to win a gold medal in an Olympics. This is also Uganda’s first gold medal at the Tokyo 2020 Olympics, and the African country’s third Olympic gold medal in history, after the men’s 400m hurdles of John Akii-Bua in 1972 and Stephen Kiprotich at the marathon. London 2012.

The achievement of 9 minutes 1 second 45 helped Chemutai set a new national record for Uganda, but could not beat the Olympic record of 8 minutes 58 seconds 81 that Russian runner Gulnara Galkina-Samitova set in Beijing 2008.

A surprise happened in the final of the 3000m obstacle course on the Olympic field on the evening of August 4, when the number one candidate Beatrice Chepkoech only finished seventh with 9 minutes 16 seconds 33, which is nearly 15 seconds behind the champion Chemutai. . This achievement is also far short of the world record of 8 minutes 44 seconds 32 set by Chepkoech himself at the Diamond League 2018 in Monaco.

Injuries, according to Chepkoech, kept her from being at her best. The 30-year-old Kenyan runner said after the race: “I set my sights on winning, but because of the injury, my mind is unstable. I have problems with my two tendons and hamstrings, back and stomach. I got injured during contest in Kenya and tried to get treatment, but not fully recovered.”