After bogey because he fell into a bunker on hole 7, Louis Oosthuizen missed the opportunity to be crowned and entered the group of few champions from an overwhelming lead at major The Open. 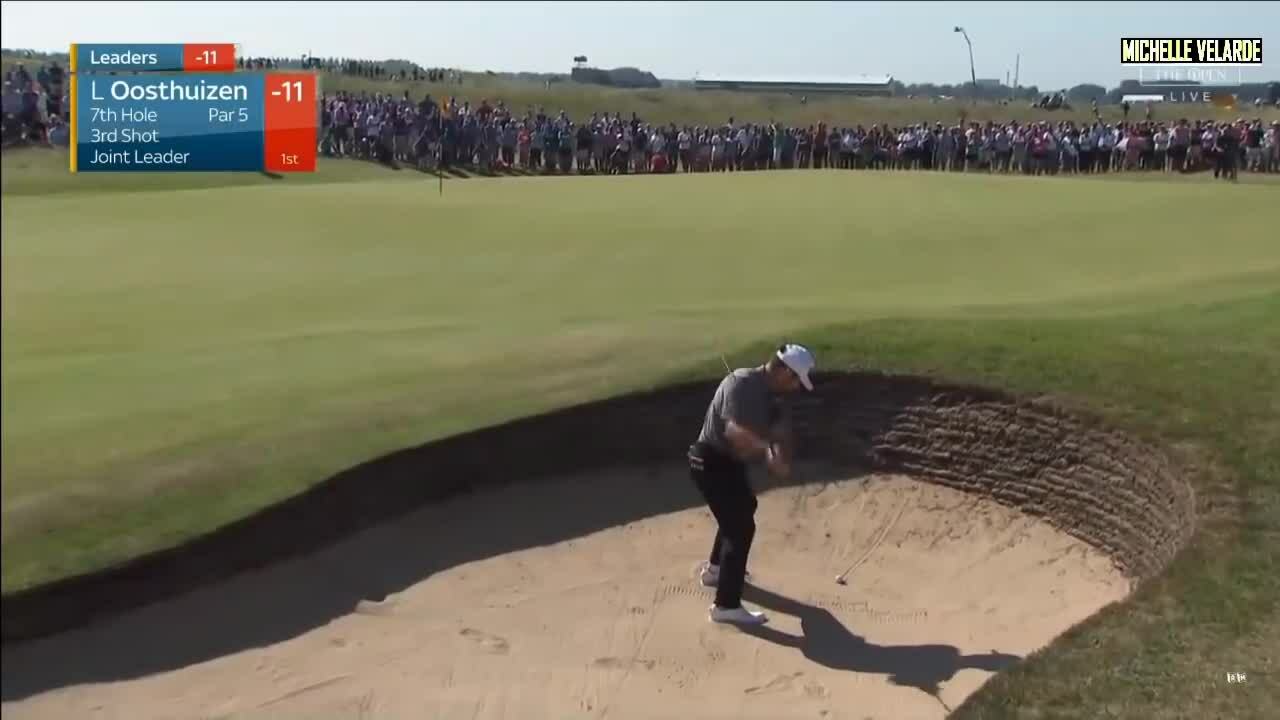 This year, Oosthuizen has the opportunity to achieve a similar rare achievement – leading from the start to the end of 54 holes with a record of 64-65-69 respectively. When he finished 36 holes, the South African golfer also broke the 36-hole The Open record – 129 strokes, one less than the previous 130-hole ceiling set by Sir Nick Faldo at Muirfield in 1992 and Brandt Snedeker at Royal Lytham & St Annes back in 2012.

But in the last round on July 18, Oosthuizen lost his fire.

After the 4th hole bogey, the player born in 1982 had to share the top of the table with Collin Morikawa – the American junior in the same group. Then he made a costly mistake at hole 7, par5. Down the fairway after the first shot, Oosthuizen wanted to hit the green with a long iron but entered the bunker to the right of the hole with his target near the middle of the left edge.

The ball went over the high hazard on the third shot but into the opposite rough. That position couldn’t hit the target, so Oosthuizen took a detour – brought the ball to the front edge of the green, then two bogey putts. In contrast, Morikawa birdie on hole 7 to monopolize the top thanks to a sharp strategy – bringing the ball closer to the green on the second shot from there directly on target for the third shot.

This hole was the easiest in the final round because it recorded only five bogeys, including Oosthuizen for the entire closing day, at least three eagles – by Spieth, Jon Rahm, and Corey Conners.

After the second bogey, Oosthuizen fell and Morikawa added two birdies for a three-stroke lead at the end of the first half.

In the second half of the yard, Oosthuizen birdie “passed” the hardest – hole 11, par3.

However, he floundered for the next three holes, with par-bogey-birdie. Spieth went one hole ahead, putting pressure on Morikawa, one stroke away by birdie on the 13th and 14th. But when Spieth entered the 15th, Morikawa added a fourth birdie, doubling the advantage. At this point, the race to the podium is in a two-horse position. Even so, Morikawa maintained a two-stroke lead to the end of the round, holding par for the last four holes like Oosthuizen and Spieth.

Morikawa carried the Claret Jug with $2.07 million at The Open in the 149th match. Spieth finished second at -13, receiving $1.198 million. Oosthuizen and Jon Rahm shared a bonus of $682,500 for the T3 position (point -11). This is the third time in a row Oosthuizen has finished in the top 3 in the traditional major quartet, the previous two being runners-up – the PGA Championship and the US Open.

Oosthuizen did not meet the media when he finished his professional career at The Open 2021. “The only thing that remains in my mind is the audience of The Open. Sincere thanks to all of you who have warmly supported me these past few days. And I congratulate Morikawa today showed class and courage. Well done, mate”, Oosthuizen messaged via Twitter.

“Hole 7 was definitely the turning point. I don’t know what happened to him in the bunker escape. The ball was in a difficult position or something but that moment gave me a two-stroke lead and put the competition into play new”, Morikawa said above Golf Channel about Oosthuizen’s bunker collapse at the easiest pin on the last day.