American boxer Dustin Poirier said that Conor McGregor could only complain and blame the injury after losing to him at UFC 264 on July 10.

“I feel that McGregor’s constant complaining shows his mental weakness. He just makes excuses and excuses. But I don’t read too much, or watch those videos, because I’m back home. with his family,” Poirier said on his YouTube channel THE FIGHT with Teddy Atlas July 23rd.

“I won. I know what I need to do to win, before the game, in the training sessions. I did everything well, giving my best when I stepped up to the octagon. What McGregor likes many other people say, it’s just noise. I don’t care. The victory belongs to me, and I’m the candidate for the number one title,” continued the 32-year-old American boxer.

The long-awaited third fight between McGregor and Poirier at the UFC 264 event, at T-Mobile Arena, Las Vegas on July 10 ended quickly, when McGregor flipped his ankle at the end of the first half and could not continue to fight. . After undergoing surgery on his tibia and fibula and being discharged from the hospital on July 14, McGregor revealed that he injured his leg before the UFC 264 event, and attributed this to the reason why he soon lost to Poirier.

“You can save any picture on your phone. McGregor could have saved the ankle tape pictures because of that injury, and said this would be ‘Plan B’,” Poirier said. . “I was surprised that McGregor broke his leg and kept saying crazy things. But I don’t care much about what he says.” 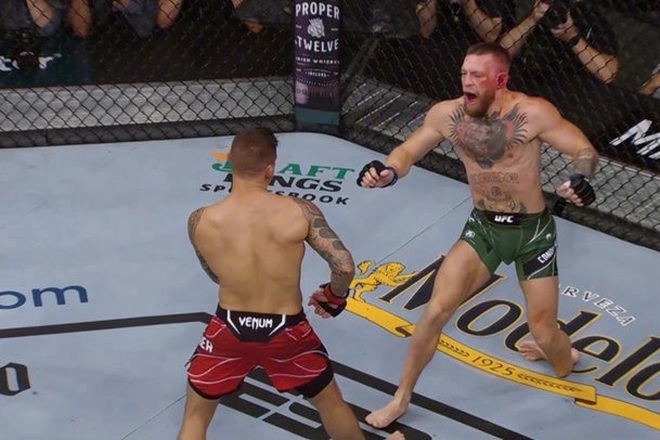 When McGregor was taken to the hospital on a stretcher from the octagonal cage after UFC 264, Poirier celebrated his victory by mimicking the champion’s ankle-flip gait. Poirier then continued to mock McGregor when showing off a necklace with a picture of the boxer nicknamed “The Notorious” worth $ 100,000. This is a gift from American YouTuber Jake Paul to Poirier after his victory at UFC 264. The American UFC fighter announced that he would auction this necklace to donate to the “Good Fight Foundation” charity founded by him and his wife.

Winning McGregor, Poirier is currently the number one candidate for the lightweight championship match with defending champion Charles Oliveira. Meanwhile, McGregor dropped to ninth place, and is in danger of falling out of the Top 10 when he is likely to miss a year because of a leg injury. This is also the first time the 33-year-old boxer has been in the Top 5 since moving to UFC lightweight at the end of 2016.