Irish boxer Conor McGregor was injured and was sentenced to lose when he rematched his predestined opponent Dustin Poirier at the UFC 264 event on the evening of July 10.

Much awaited by fans and experts, but the third fight between McGregor and Poirier at UFC 264 event, at T-Mobile Arena, Las Vegas ended quickly.

McGregor entered the initiative when he continuously launched low-range kicks and squeezes. But Poirier broke out of the lock, and then responded with punches and elbows.

When the first round was about eight seconds, McGregor missed and flipped his ankle. Poirier immediately rushed to launch a series of punches but could not finish the opponent.

During halftime, the doctors entered the octagon to examine McGregor’s injury and ordered the fight to be stopped. Poirier, therefore, was awarded the technical knockout and the third confrontation between the two fighters was over in just five minutes.

When referee Hearb Dean announced the victory belonged to Poirier, McGregor loudly attacked and criticized the opponent. “It’s not over yet. I’m bleeding in the head, and bleeding in his leg. I’m ready to deal with him outside the octagon,” McGregor shouted. 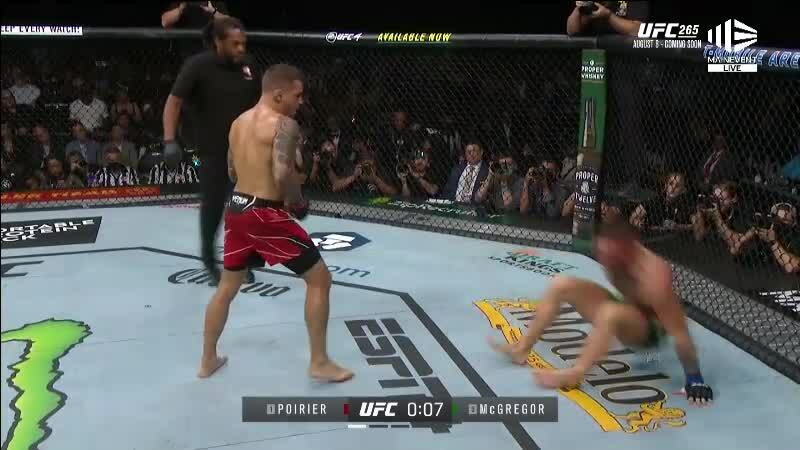 Meanwhile, Poirier mimicked McGregor’s gait to mock his opponent who had to leave the arena on a stretcher. “I felt something, it looks like McGregor broke his leg. He had some good kicks, like the last fight. That worried me a bit,” the 32-year-old American boxer said after the match.

Before the match on the evening of July 10 in Las Vegas, Poirier and McGregor had met twice, and each won one. In 2014, McGregor knocked out his opponent in the first round. But in the rematch at UFC 257 in January 2021, Poirier successfully avenged, defeating McGregor with a technical knock-out in the second round.