Brooks Koepka has just added income from his colleague Thomas’s pocket by scoring the eagle on the 18th hole, second round of the Travelers Championship on the PGA Tour.

The tournament takes place at TPC River Highlands, par70 with a prize fund of 7.4 million USD, opening from June 24.

Yesterday, Koepka entered the second stage from the back half, through eight holes to a round-2 score – four pars, three birdies and a bogey.

On the par4 18 hole, 444 yards long, Koepka played 288 yards down the right side of the fairway. The PGA Tour recorded this position 159 yards from the hole. But Koepka has since scored eagle on the second iron stroke. 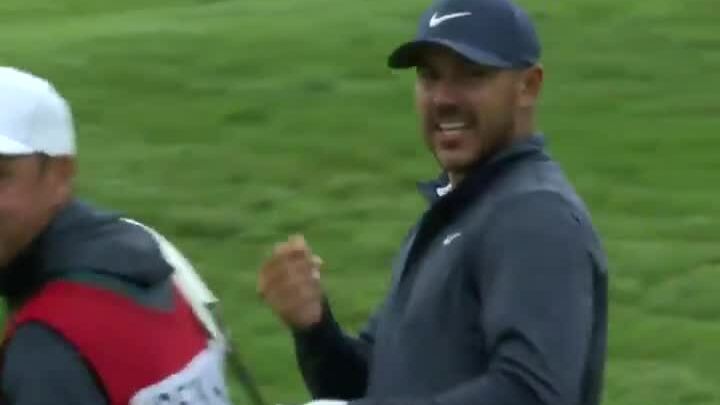 Koepka then scored eagle 159 yards from the hole

Finished, Koepka turned to a nearby camera, and made a gesture of counting money and calling out the name “Justin Thomas”.

“Damn it”, Thomas expressed a bitter attitude on Twitter. The American golfer born in 1993 wrote a seemingly indifferent curse, but in fact intended to make a joke in a private betting agreement with his compatriot – over 3 years old on the PGA Tour – with effect in the third season. Accordingly, “each eagle beyond 50 yards is worth $1,000”.

After the eagle on hole 18, Koepka added a birdie and two bogeys on the remaining nine holes, including the closing bogey on hole 9, par4. At this 406 yard, Koepka has two shots yet to hit the green and three putts to finish, including the first shot from outside the hole, 9.7 meters away. The ball crossed the green, went inside, but lost power and hit the slope, so it returned to the fairway.

After two matches, Koepka stood at T35 with a score of -4 while the top of the group was -9. This position is occupied by Jason Day. Yesterday, Day hit 62 with eight birdies and no bogey.

The 33-year-old Australian golfer owns 12 PGA Tour championships, including the 2015 PGA Championship major, and accumulated 51 weeks at the top of the world rankings (OWGR). But since his last victory at the Wells Fargo Championship in May 2018, Day has not yet won another title, largely because of a back injury.

Through 36 holes of Travelers Championship this week, following Day are 18 players within three strokes, of which Bubba Watson and Kramer Hickok are closest – T2 with -8 points.