AmericaOn August 15, the PGA Tour 2020-2021 recorded the 12th play-off, where Kevin Kisner won the Wyndham Championship thanks to the birdie of the second extra hole.

Yesterday on the first extra hole, there were five players holding par and Scott holding the win from a birdie opportunity 1.2 meters away. But he missed the target. The group returns to the top of the last hole for the second round. This time, Scott, Sloan, Kim are outsiders.

Of the rest, only Kisner entered the green near the hole. And he finished with a 0.9-meter putt, thereby winning the Wyndham Championship with $ 1.152 million, and winning the fourth time on the PGA Tour. Scott, Sloan, Na, Kim and Grace all returned to T2

In the period 2015-2020, Kisner lost all five playoffs in the format of sudden death – closing the results of each hole. “This is my first time winning a playoff. It’s such a sweet feeling to stand here holding the Cup,” Kisner said during the award ceremony.

Before his sixth extra game at the Wyndham Championship, Kisner scored -11, four strokes off the top of the table after 54 holes. But the finish line, the American golfer in turn birdie-birdie-par through the last three holes and then finished at -15 after 72 standard holes.

The tournament wouldn’t have needed a play-off if Russell Henley had hit it firmly. Henley led all three rounds, entering the final game with a -15 point and a three-stroke advantage. On the closing day, he went from hole 1, to a score of -17 at the end of the 10th hole. However, in the next four holes, Henley reached three bogeys. Then, when he entered the green on the 18th hole, the 32-year-old golfer broke his par to keep 1.1 meters away, so he had to return to T7 (point -14). 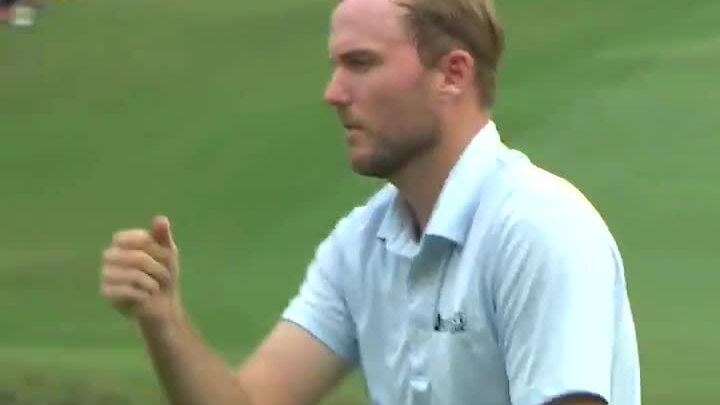 Henley missed from 1.1 meters away

After this short-range putt, Henley failed three times from the top of the table after three rounds, including the 2020 CJ Cup and the major US Open in June.

“Knowing to try to negative score this match but still failed. This shot is too painful,” Henley shared after the final round of 71 strokes on par70.