On May 30, American golfer Jason Kokrak received $ 1.35 million when he defeated Jordan Spieth in the final round of the PGA Tour event in Fort Worth, Texas.

Kokrak took to the podium at -14, thanks in part to Spieth’s loss of fire. In the last game, Spieth hit 73 strokes, while Kokrak “break even” with 70 strokes on Colonial, par70.

Spieth scored two birdies, but by five bogeys, Kokrak’s five birdies made up for the same number of bogeys.

On the closing day, Kokrak reached 319.6 yards in two holes, recorded by the Organizing Committee, the average distance of the first shot. The whole round, he hit 11 of the 14 fairways, went to the green according to the standard (GIR) 12 holes. By the same token, Spieth is 13 yards shorter, hits four fewer fairways, and has four holes lower GIR.

Spieth holds the top of the table for three consecutive rounds, from May 27. After 54 holes, he scored -15 and led Kokrak by one stroke.

Early in the title game, Spieth took a two-stroke lead as a bogey opponent entered the game. But after 11 holes, Kokrak led a birdie from a putt more than four meters away. On the 13th hole, he birdie again 5.1 meters to increase the advantage to two strokes.

At the end of the penultimate hole, Spieth was only one club away because compatriot America bogey consecutively two holes before.

At this point, the crowd cheered for Spieth. The former Texas-born world number one golfer had to signal to the home state audience to keep order and reduce the frenzy.

However, Spieth seemed hopeless after the second shot into the lake near the left edge of the green on the 18th, par4. 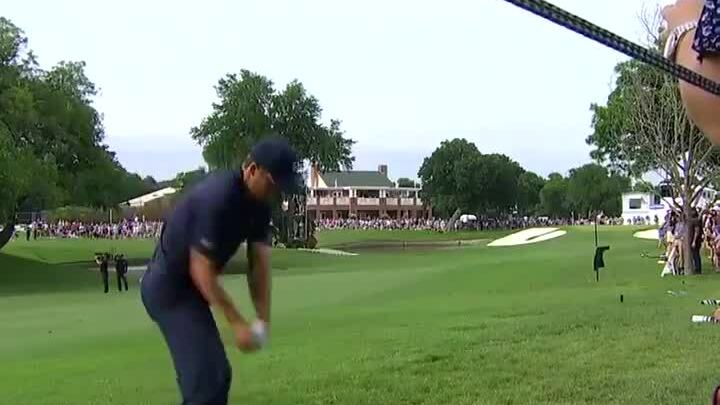 Spieth hits the ball into the lake near the left side of the green on hole 18, par4

After dropping the ball with a penalty stroke, Spieth chipped in and then a bogey pinned putt. This hole, Kokrak onto the green properly – “2 on”. Nearly 16 yards from the target, he kept two putts with par, with the shot just over a meter ahead.

Spieth finished second, receiving $817,500. This is the eighth time Spieth has finished in the top 10 across the last 11 events.

“The audience supported Spieth in the title fight with me. But this match, we didn’t play well,” Kokrak said of individual and opponent performance. “I was bad today, the swing wasn’t effective, so this round was terrible,” Spieth said.

With the Charles Schwab Challenge 2021, Kokrak won the PGA Tour for the second time in 249 events. It took him 233 attempts to win the first title – CJ Cup 2020 in Las Vegas.